Meet and assist at Athens International Airport and transfer to your hotel. Rest of the day is yours to spend to explore this fascinating city.Athens. A magical city. The city with the most glorious history in the world is worshipped by gods and people. The enchanting capital of Greece has always been the birthplace of civilization. It is the city where democracy and most of the wise men of ancient times were born. The most important civilization of the ancient world flourished in Athens and relives through superb architectural masterpieces. Optional Athens by Night Tour. Accommodation in Athens.

From the Acropolis to Omonia Square, with the half-day Athens sightseeing and Acropolis museum tour you'll see all the famous sites of ancient and modern Athens on this comprehensive morning tour. Offering a perfect overview of the city, this guided half-day tour, the only one which includes headphone system will help you get your bearings if this is your first visit to Athens. We start with a photo stop at Panathinaikon Stadium where the first modern Olympic Games took place in 1896. It is the only stadium in the world that is built out of white marble. We then proceed, passing by Zappeion and The Temple of Olympian Zeus. We will then pass the Athens Trilogy which includes the University of Athens, the Academy of Athens, Catholic Cathedral, Old Parliament, Constitution Square, Russian Orthodox Church, and finally the ACROPOLIS where we will visit Propylaea, Temple of Athena Nike, Parthenon, and the Erechtheion with its Porch of Maidens). We continue the tour with a short pleasant walk passing by the Herodion and Dionysus Theater in order to visit the ACROPOLIS museum. We skip the lines of the new museum and proceed to see the main attractions such as votives, artifacts of everyday life, statues from archaic period, Caryatids, and of course the Parthenon hall with the metopes, the pediments and the frieze that will amaze you. Evening free or optional Cape Sounion or Athens by Night tour. Accommodation in Athens.

Today after breakfast, you will check out from your hotel in Athens and transferred to Piraeus port for your ferry embarkation to Mykonos Island. Mykonos sits amidst the Aegean Sea like a unique Jewell handcrafted by time, the Greek sun and an anonymous local craftsman. All that can be said or written about Mykonos would be just too little. For centuries Mykonos existed under the shade of the religious centre of Delos and it had to wait until the 20th century to reach its international status and win a place on the world tourist map. Mykonos, famously called 'the island of the winds' due to the constant wind that blows, is the most popular and cosmopolitan island of the Cyclades and considered as one the most famous islands of the world. The sunlight of Mykonos from its first sunshine of dawn all the way to its last of the sunset is astonishing and supplements an atmosphere of images that seem to have sprung out of a painting. Arrival in Mykonos and transferred at your hotel. Rest of the day is free in order to explore the island. Accommodation in Mykonos

Today, after breakfast the day will be free in order explore the island. Among the cobbled streets, next to the churches, behind the freshly painted shutters, through the delivery of island living, the heavenly beaches and the liveliness of the night, Mykonos still keeps its secrets: The happiest different moments for everyone, here, on the most famous island in the world, each one of us makes each moment UNIQUE. Mykonos retains full beauty through the passage of time, and is and always will be a perfect host to visitors, offering unlimited vacation and great expectations. Accommodation in Mykonos

Today, after breakfast you will be picked up from your hotel and transferred at Mykonos port for your ferry embarkation to Santorini Island. A thousand sunsets, a thousand memories, a thousand heartbeats, colours of blue red & gold streaking the sky ... this is Santorini island ... Poets have written about it, artists attempt to capture its beauty. Nothing can quite describe ... the unsurpassed magic of Santorini. This tiny Greek island in the Aegean Sea, rich in history & steeped in myth, is situated on the southern east tip of the Cyclades Cluster. Once famous for its seafaring captains & thriving trade from Russia towards England, France & Italy, & even further back in time the biblical volcanic catastrophe of 1500 BC, today Santorini is one of the most popular holiday destinations worldwide. Arrival in Santorini and transferred at your hotel. Rest of the day is yours to spend in order to explore the island and admire the breathtaking view. Accommodation in Santorini

Today, after breakfast you will be picked up for a cruise at the caldera and its hot springs. During this tour, you will have the unique chance to visit the active volcano of Santorini, walk on dried lava up to its peak, feel the heat underneath your feet and see the steam of sulphuric gases emerging from the earth bowels. Next, you will sail to the thermal springs where you can dive or step down into the blue waters in order to swim towards the springs (35-36 C). Last you will visit the traditional sister island of Santorini, Thirassia, where you can either swim, go up to the village or simply relax and have something to eat. Return at your hotel. Accommodation in Santorini

Today you will be transferred to Santorini port for your ferry embarkation to Crete Island. Arrival at Heraklio Port and transferred to your hotel.Crete is an island with an exquisite 1,000 kilometre-long coastline dotted with numerous coves, bays and peninsulas, which afford a multitude of soft, sandy beaches along the beautifully blue Mediterranean Sea. After all, it's among the finest in the world and has established Crete as one of Europe's most popular holiday destinations. And, of course, the island's historic importance in today's world as the home of the Minoan civilization with important archaeological finds at Knossos, Phaistos and Gortys, is evidenced by the tens of thousands of visitors to these sites each year. However, Crete is the largest island in Greece - the fifth largest in the Mediterranean - and, within its diverse area of more than 8,000 square kilometres, there are many other jewels just waiting to be discovered by the more adventurous explorers of holiday treasures. Rest of the day is free in order to explore the island. Accommodation in Heraklion.

Today, after breakfast the day is yours to spend in order to explore Heraklio (The capital) or experience an optional tour. This city more than lives up to its reputation as being one of the most attractive of the many cities of the Mediterranean! It can satisfy the wishes and demands of a diverse variety of visitors from all over the world, while still providing enjoyment and satisfaction to its permanent residents. It is certainly not a matter of coincidence that it has been the center of Crete for so many centuries, and continues to be so, thanks to an abundance of sightseeing attractions, its joyous way of life, and the legendary hospitality of the Cretan people. For inquisitive visitors, it is important to note that, in Heraklio, there are to be found and admired the oldest monuments in Europe. It is here where the first roots of the most ancient civilization in Europe were planted, a testimony for Western civilization, as we know it. It is here in Heraklio that Zeus, the God of Hospitality, fell in love with Europe, a most beautiful princess, from whom and whence the Minoan Kings were born, along with those wise mythical figures who laid the foundations for and instituted the first civilized society on our Continent. An outstanding archaeological museum and the magnificent excavations at Knossos will certainly testify to that fact. However, modern-day market is the richest of its kind on Crete, and among the most varied of any in the Mediterranean region. Souvenirs, furs, jewellery and gold items, food products and clothing, just about anything that one could wish for or need are here in abundance, and at a wide range of prices. The famous Cretan products, such as olive oil, wine, raki, honey, and herbs are, of course, of special importance and a major attraction to visitors and residents alike. They all seem to appreciate the locally distilled raki, a strong alcoholic beverage that, because it lacks any additives, can only add to a hangover the following morning. Accommodation in Heraklion

After breakfast, proceed to the airport to board your fight back home via Athens with eternal memories of your Greek holiday! 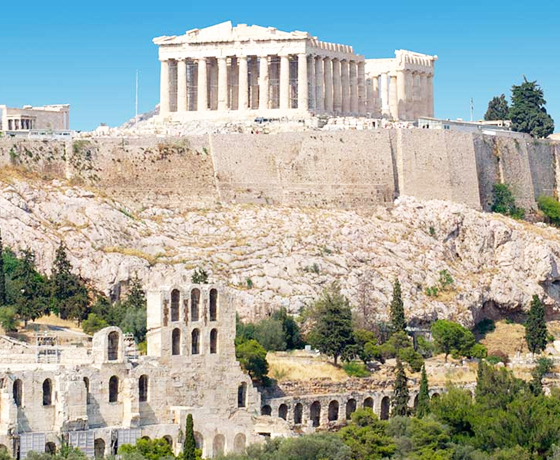 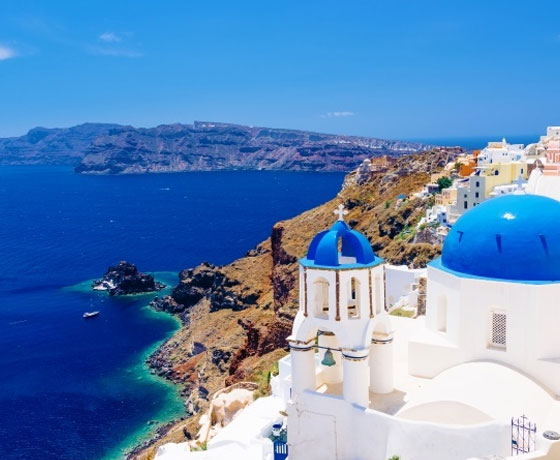 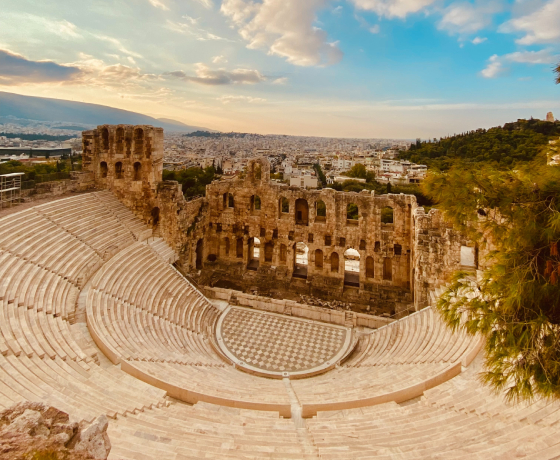