After breakfast City tour begins with a visit to the Upland Park. Upland Park is located on a hill in the western part of the city. This is the best place to see the city and the Baku Bay. The architecture of the capital is very eclectic; it is a combination of different styles and influences such as barocco, classicism and modern architecture, both Eastern and Western. The rout covers the downtown an shows the most interesting historical and architectural sights. The tourists will visit and see the Flag Square, a new Carpet Museum – design of the building is distinguished by its originality as the museum is built in the form of a folded carpet; stroll through the Baku promenade, enjoy the look of the House of Government, the Philharmonic Theatre named after M. Magomayev, the Baku Mayor’s office and will visit the “Governor’s garden.” Then the tour will continue visiting the “old city” that had preserved and walls and narrow cobbled streets till our days... A number of the Soviet-time movies were shot here. Tourists will see the main attractions of the Old City, including the Palace of the Shirvan Shahs (XV cent), the symbol of the city – Maiden Tower (IX cent), Karvansarays, mosques etc. We will continue our excursion visiting Baku Ferris Wheel (Devil's Eye) Boat tour in Caspian Sea and walking along Baku Boulevard (26 km long, cafe/restaurant/shopping mall available) Returm to the hotel for refreshment Dinner at Indian restaurant Transfer back to Hotel Overnight in Baku.

Breakfast in Hotel Azerbaijan is one of the few places on earth, where even today one can observe elements of preserved fire cult and the ancient Zoroastrianism religion. These places where oil oozes from the earth, and natural gas breaks out like flaming torches have always attracted fire worshipers from around the world. Baku, its oil, its “burning earth” have been known far beyond its borders since ancient times. The official religion of the ancient states that emerged in the VII century BC, such as Mann and Midia was Zoroastrianism. The spread of Zoroastrianism in the territory of the modern Azerbaijan was due to spontaneously flammable sources of oil and gas. Therefore, in this area such a monument as the temple Ateshgah has survived. Fire Temple Ateshgah (literally Fire House) is located in 30 kilometers from the center of Baku, in the south- eastern outskirts of the Absheron Peninsula. ? Coming up next on the program guests will visit the village Mehemmedli. ? Next to this small village in the Absheron peninsula Mount Yanardagh is situated. The word “Yanar” in Azeri language means “burning”, and “Dagh” – “mountain”. And this is real a burning mountain – not metaphorically, but literally. Once in Absheron it had been a lot of places where natural gas coming out from the earth to the surface ignited spontaneously, but with the start of mass extraction of oil and gas in Absheron these places started to disappear. At present, it is the only place of this unique natural phenomenon – the output of natural gas to the surface. Dinner at Indian restaurant. Overnight

Breakfast in Hotel Gobustan reserve is well known with its perfectly preserved rock paintings – petroglyphs – a kind of artistic “archive” of human evolution on the Earth. “Documents” of such archives is the first human’s presentation of his/her “I” to the outside world. ? Gobustan Rocks are not just the brightest witnesses of the prehistoric period of human existence. They reflect the history of this region for nearly 15,000 years – since the end of the era of the Upper Paleolithic till the Middle Ages. Of particular interest are the images multi-oar boats, with a light source at the stern. They were drown above the level at which people had been portrayed, and this phenomenon set up a lot different interpretations. Today Azerbaijani scientists found, described and studied more than 4,000 petroglyphs (rock painting in the stone carving art) and this important work continues. Before the start of the tour around Gobustan guests will visit the interactive museum with the same name, where with the help of special programs and multimedia touch screens you will get information about the nature, the flora of Gobustan. Only few people know that Azerbaijan ranks the first place in the number of active mud volcanoes. Traces of their work can be found in Gobustan as well. These volcanoes are formations of a cone-shaped hill with a crater in the ground. And of course, that the tourists also have the opportunity to explore them during this tour. Dinner at Indian restaurant. Overnight

Breakfast in Hotel Arrive in Baku. Check-in to hotel for refreshment Free day at will with available car for shopping. Dinner at Indian restaurant. Overnight

After breakfast, proceed to airport. 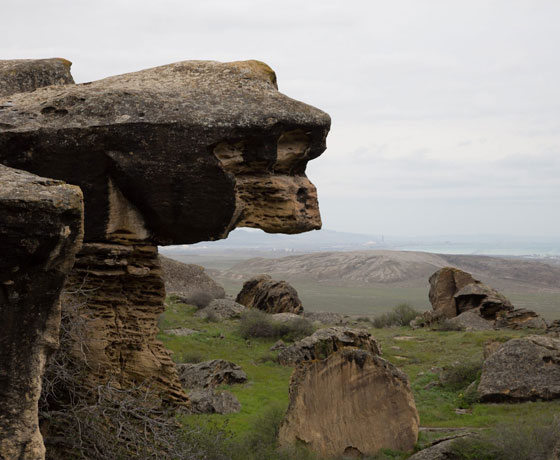 Send Enquiry for BEST OF AZERBAIJAN